Cuba and the United States: The challenge of building a future without forgetting the past 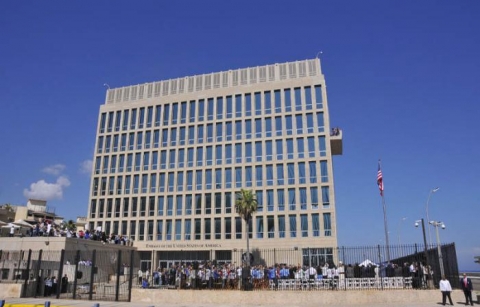 When John Kerry stated on August 14, in Havana, that Cuba and the United States could lowered the U.S. embassy flag on January 1961. To his right was Wayne Smith, a young diplomat assigned to the Cuban capital at the moment when President Eisenhower decided to sever diplomatic relations. Smith later became Head of the U.S. Interests Section at the end of the James Carter administration, but resigned at the beginning of Ronald Reagan’s presidency, becoming a tireless advocate for a change in U.S. policy towards the island. From the Malecón, three classic Chevrolets watched over the official reopening ceremony, the foremost a black 1959 Impala.

History, just like the stars and stripes flag, was up in the air that morning.

If the head of the U.S. diplomatic mission looked to his left, he would have surely seen the single star Cuban flag waving atop 138 flagpoles built to honor Cuban victims of terrorism and commemorates every year of the struggle from 1868 to 2006, when it was created.

Hundreds of people gathered outside the Interests Section to witness the historic ceremony, the equivalent of which took place at the Cuban mission in Washington last July 20.

Rosa Magdalena was one of the first to arrive, together with a little girl who barely reached her waist. “I was 11 when Cuba and the U.S. broke diplomatic relations. Today I wanted to bring my granddaughter so that she could witness the beginning of a new era.”

From the place where Magdalena and her granddaughter stood, and the balconies of neighboring buildings, shouts of ¡Viva Cuba! (Long Live Cuba!) were heard as the first notes of the National Anthem rang out.

The opening remarks were made by U.S. Embassy Charge d’affaires Jeffrey DeLaurentis who has a longstanding relationship with the island. His first assignment here was as a consular official at the Interests Section between 1991 and 1993, and then as head of the Political-Economic Section from 1999-2002.

DeLaurentis was followed by Cuban born poet Richard Blanco, who made history by participating in Barack Obama’s second inauguration. Against the backdrop of the dazzling blue Havana horizon, Blanco read a piece entitled “Matters Of The Sea”in English.

Kerry ascended the podium, admiring the morning weather conditions, although the strong sun was already beating down on the embassy patio. This wasn’t his first time in Cuba. He visited the country in 2000, as a Senator and aspiring Democratic Party candidate in that year’s U.S. elections. But it was the first time a U.S. Secretary of State had stepped foot on Cuban soil since Edward Stettinius at the end of WWII.

This is “a day for pushing aside old barriers and exploring new possibilities,” he stated. Speaking in Spanish he noted, “It’s helpful for the people of our nations to learn more about each other.”

Then he recalled the two countries’ complicated shared history, from Playa Girón (Bay of Pigs) to the fall of the socialist camp and the subsequent tightening of the blockade. “For more than half a century, U.S.-Cuban relations have been suspended in the amber of Cold War politics.”

During his speech however, he also recalled the great distance which still separates ideas regarding justice, human rights and democracy on both sides of the Florida Straits.

It is all people, throughout the world, and not governments, who decide what “genuine democracy” is.

We will have to wait and see how U.S. citizens might judge the human rights of a society with high levels of security, where racism isn’t tolerated, and whose political system is not based on money but rather citizen participation.

Beyond the idyllic beaches and urban landscapes preserved in time, they will find a country where education, culture and health are not treated as business, but are fundamental rights, and where men and women enjoy equality at an institutional level.

The Secretary of State himself instructed the Marines Larry Morris, Jim Tracey and Mike East – who never imagined they would have to wait over half a century to return to Cuba with their flag – to stand. The three then handed the standard over to three young soldiers who raised it while the U.S. Army’s Brass Quintet played the country’s National Anthem.

There were about 200 people seated in the embassy patio. Each one having contributed, in one way or another, to concluding the first stage of the process announced by Presidents Raúl Castro and Barack Obama on December 17, 2014, to normalize relations.

The Cuban delegation was presided by Josefina Vidal, Ministry of Foreign Relations general director for the United States, who also led the island’s negotiating team during the rounds of talks which took place in Havana and Washington to arrive at a final agreement regarding the reestablishment of relations and the opening of embassies. Also present was Vidal’s U.S. counterpart, Assistant Secretary of State for Western Hemisphere Affairs Roberta Jacobson.Seated in the front row was Cardinal Jaime Ortega Alamino, who told Granma that he had been witness to a historic day, although, “We are just setting out on a promising path.” He likewise highlighted the “discrete but important” role played by Pope Francis in bringing the two countries closer together and the significance of his visit to Cuba this coming September.

Kerry was accompanied by officials from the U.S. State Department related to Cuban policy, as well as legislators driving forward the campaign to end the blockade in Congress.

Commenting to this paper, Democratic Senator Patrick Leahy, president pro tempore of the Senate and longtime defender of rapprochement between the two countries, noted, “It’s a big step, but there still remains much to be done.”

His colleague, Republican Senator Jeff Flake, currently supporting a bill in Congress to eliminate travel restrictions to Cuba, stated that given the speed at which things are moving, his proposal could be passed in a matter of months, although it would then need to be approved by the House of Representatives.

Flake noted that the Republican position is changing, a sentiment shared by Carlos Gutiérrez, Cuban-American businessman, former executive director of the Kellogg company and previous Secretary of Commerce during the George W. Bush administration. It will take time – he added – but at the end of the day they will realize that its time to look to the future.

Democratic Senator for Minnesota Amy Klobuchar, who is also supporting another bill to lift trade restrictions, didn’t offer dates, but said that the proposal already has around two dozen supporters, with new ones joining every week.

“Now we have to focus on the U.S. Congress, one of the most dysfunctional institutions in the world, doing its job,” stated James Williams, president of the bipartisan coalition Engage-Cuba, lobbying for an end to the blockade.

Several members of the Cuban community in the U.S. who believe that the U.S. policy maintained for over 50 years has isolated them from their country were also present at the ceremony.

At the end of his morning speech, Kerry stated to the audience in Spanish: “We are certain that the time is now to reach out to one another, as two peoples who are no longer enemies or rivals, but neighbors.” This is the challenge now facing Cuba and the U.S. – without forgetting the past or the sacrifice of 11 million Cubans who have won the right to see the U.S. flag fly in a free homeland.