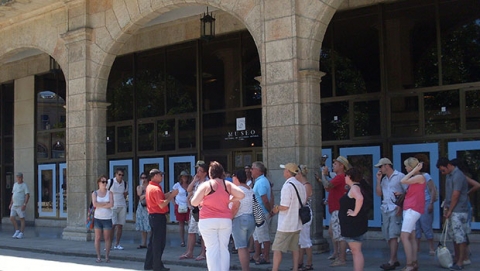 The increased travel by Americans to Cuba since the beginning of thaw with the United  States proof that 54 years of embargo failed to end with the interest of the yankees in the nearby island. For decades Americans have not been allowed to visit the island 90 miles off the coast of Miami.

Since both countries announced last December the “normalization of bilateral” the number of Americans heading to the Caribbean island grow by  36 per cent  despite the fact that the American embargo remains largely in place.

New regulations approved by the government of President Barack Obama allowed Americans to visit Cuba for a number of reasons, without obtaining a special license from the US Government, as was the norm before. These exceptions include family visits, official US government business, education and religious trips.

Company president Tom Popper, of New York-based tour operator InsightCuba said they were adding excursions as its monthly bookings explode compared with early 2014. Old Havana saw an increase in 16 per cent more visitors in January, compared to the year before, helping to contribute towards Cuba’s $2.6 billion-plus tourism economy. Experts said that under the new restrictions 600,000 US travelers are expected to visit the country, with the majority of them Cuban-Americans visiting family.

Ferries companies said that day that they were notified of approvals by the U.S. Treasury and Commerce departments, the first since Washington imposed a trade embargo on Cuba.

A Treasury spokeswoman confirmed approval of ferry licenses but would not say how many were approved. Cuba also must approve the operations.

If the requirements were lifted, Cuban officials estimate the current number of visitors to Cuba would increase to 1.5 million Americans, adding to the strain the island already has in accommodating tourists during the December-April high season.

As part of restoring diplomatic relations with Cuba, the US will reopen an embassy in the capital of Havana and carry out high-level exchanges and visits between the governments.

Obama does not have the authority to fully lift the US economic embargo on Cuba, as Congress enacted that policy but officials stated he would welcome lawmakers taking that step.