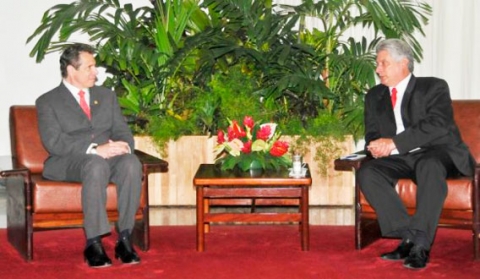 JetBlue’s President and CEO, Robin Hayes, was joined by many private sector and political leaders from New York on the “I Heart Blue York” logo jet for a special state trade mission flight to Havana, Cuba to discuss economic and political relations.

This trip marked the first time that a current U.S. governor has visited Cuba since the recent thawing of relations began earlier this year.

A JetBlue spokesperson said in a statement to Airways News that “As New York’s hometown airline, we are pleased to participate in the nation’s first state trade mission to Cuba since the President began the process to normalize diplomatic relations, and we applaud the Governor’s effort to develop opportunities for New York companies there.”

JetBlue is one of six U.S. airlines with rights to operate special charter flights to Cuba. It flew its first charter flight to Havana from Ft. Lauderdale on September 17th, 2011 with additional frequencies added over the years. Currently, it also serves Havana and Santa Clara, Cuba from Tampa Bay, and it continues to fly between Ft. Lauderdale and Havana.

Once it is permitted for airlines to operate regularly scheduled air service between the two countries, the airline has big plans for the Cuba market, but it would not disclose its exact plans.