Point of View: Cuba booming as tourists flock there before Americans come 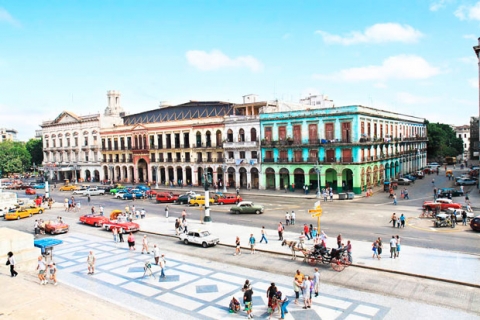 Bookings to Cuba jumped 57 per cent for one New York tour operator in the weeks after Washington said it would renew ties with Havana. In February, they were up 187 per cent; and so far this month, nearly 250 per cent.

The boom is just one sign that the rush is on to see Cuba now — before, as many predict, McDonald’s claims a spot in Old Havana and Starbucks moves in on Cubita, the island’s premium coffee brand. The sense that detente will unleash an invasion of Yankee tourists and change the unique character of one of the world’s last remaining bastions of communism is shared by many travellers flocking here.

“Cuba has a very authentic atmosphere which you see nowhere else in the world,” Gay Ben Aharon of Israel said while walking through Revolution Square. “I wanted to see it before the American world … but also the modern Western world comes here.”

Outsiders may romanticize the “time-capsule” nation, but many on the island are ready for change.

Many are predicting an outright opening of U.S/Cuban relations, which would change the tourist trade there in a big way. (CBC) Where foreigners see charming, historic architecture, bright 1950s-era American cars and vast stretches of white-sand beaches, locals see decaying buildings in need of repair, new vehicles priced beyond their reach and a lack of economic opportunity.

For many Cubans living in dilapidated, multi-generational tenements, change could be good. It may expand access to the Internet and the outside world, creating engagement that could bring brighter economic days and, practically speaking, make it easier to fix a leaky roof.

“We’re very excited,” said Yadiel Carmenate, a 26-year-old English major at the University of Matanzas who moonlights as a tour guide.

Jury Krytiuk who handles Cuban travel at Toronto-area travel agency A. Nash Travel Inc says his phones have been ringing off the hook with Americans wanting to travel to Cuba.

“Havana has shown that it’s not ready for the flood,” he said in an interview with CBC’s The Exchange with Amanda Lang.

“There’s a shortage of hotels – they’re booked solid well into June. There’s a shortage of transportation but everyone from the U.S. wants to go tomorrow before Wal-Mart or McDonald’s move in.” Krytiuk says Cuban cities outside of Havana will need major redevelopment before they can handle an influx of U.S. tourists.  It’s unlikely Cuba will see major changes overnight. Talks to take the first steps toward normalized relations are just beginning and there is stiff opposition in the U.S. Congress to lifting the 53-year-old embargo that bars most trade with and travel to the island.

Still, the December announcement appears to have sparked an influx of tourism.

Already this year, more foreigners are roaming the cobblestoned streets of Old Havana. Cuba saw a 16 per cent increase in visitors in January compared with a year earlier, a total of about 371,000.

Tourism, a $2.6 billion-plus industry, is one of the main engines that has kept Cuba’s economy sputtering along. Last year, the country welcomed 3 million visitors, a record.

Some Americans already go there

About 600,000 U.S. travelers are estimated to visit Cuba each year, most of them Cuban-Americans visiting family but also tens of thousands coming on approved cultural, religious and educational exchanges. An untold number of others have, for years, skirted travel restrictions by journeying through third countries such as the Bahamas, Canada or Mexico.

Cuban officials estimate that 1.5 million Americans would travel here annually if all restrictions were removed, supplanting Canada as the No. 1 source of tourism and potentially adding some $2 billion a year to state coffers.

However, the island is hardly ready for a Yankee invasion. Already it strains to accommodate travelers during the December-April high season.

Tourists trying to dine at high-end private restaurants are often struggling to find an empty table these days, and it’s practically impossible to get a room at Havana’s best hotels. Some travel agents report being turned away when trying to book group reservations.

Rogelio Gauvin, a tourist from Canada, predicts demand will continue to outpace capacity.

Privately run B&Bs and diners that have mushroomed under President Raul Castro’s economic reforms could help ease the load on the government’s 64,000 hotel rooms and bland, poorly stocked restaurants.
The recently renovated Havana airport is set to undergo a $207 million expansion led by Brazilian conglomerate Odebrecht.

Several U.S. airlines have talked of launching service to the island; currently all U.S.-Cuba flights are operated by charter companies. Canada-based Cuba Cruise has begun marketing its sea voyages directly to Americans.

Travel agents that have been doing business here for years are aware that the competition is about to get a lot stiffer. Carlos Javier Rodriguez, head of Argentina-based tour operator Carimar Eventos, expressed hope that Cuba would reserve some quota of capacity for non-U.S. travelers.

“We tour operators,” he said, “can say that we view the arrival of American tourism with trepidation.”

For now, Rodriguez is busy tending to travelers interested “in experiencing this Cuba, and right away.”

Carmenate, the university student and tour guide, dismisses concerns that the island will lose its character.

Cubans, he said, eagerly await change but won’t allow their country to become the capitalist playground it was before the 1959 revolution.

“It’s not going to be that way. Our identity, we will preserve it at all cost,” he said. “That’s why I think that it’s going to be really hard for you to find a McDonald’s or a Starbucks right down the corner.”

Thomas Mieszkowski, a 28-year-old tourist from Leeds, England, however, was among the visitors taking in the experience of seeing Cuba now — before, he said, it risks becoming “another outpost of Florida.”