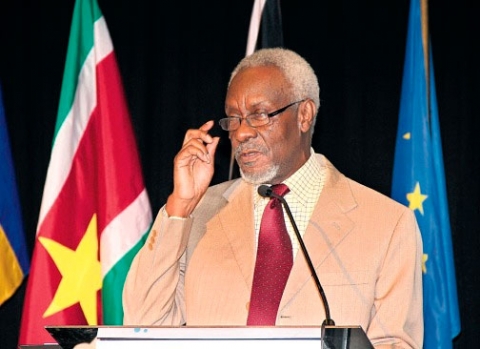 Rose Hall, St James — Former Prime Minister PJ Patterson is encouraging regional players in the tourism sector to embrace Cuba as a partner rather than viewing the Spanish-speaking country as a threat.

“I am going to step out from the pavilion and say this: Instead of people spending their time worrying about how the advent of tourist arrivals in Cuba is going to affect the Caribbean, let’s spend our time in seeing how, out of that alliance, the entire region is going to benefit by the creation of multiple destination and multicultural experience,” the former Jamaican prime minister argued.

“Now that the damage which was imposed on the Cuban image has been removed — and justly so — we are then turning around to ask whether this welcome change is going to be to the detriment of our tourist industry. We must learn, in the Caribbean that we have to work together with those countries who, by geography and by history, occupy a single Caribbean space. And I believe that this has very promising possibilities,” Patterson added.

Patterson was referring to Cuba’s removal from the United States terrorism list on Tuesday.

He recounted that, from as far back as 1972, four independent Caribbean leaders “took the decision to establish full diplomatic relations with Cuba”.

“Successive leaders have been campaigning since then for the normalization of relations between Cuba and the United States. And at long last that possibility is on the verge of becoming a reality,” the former prime minister noted. “But it has implications that go far beyond the bilateral relationship between Cuba and the United States. It’s going to impact on our region and it is going to affect relations within the entire hemisphere.”

Patterson was speaking on day one of the two-day 3rd CARIFORUM-EU Business Forum at the Hilton Rose Hall Resort and Spa in Montego Bay .

CARIFORUM is a subgroup of the African, Caribbean and Pacific group of states that serves as a base for economic dialogue with the European Union and comprises the 15 Caribbean Community members states along with the Dominican Republic.

Yesterday, Patterson argued that the Caribbean, which includes Cuba, would have a population of 37 million and an expansive economic zone.

“The main recommendations for the states of the region are for them to see a big picture — the region as a unit to deal with the world and not as fragments to be exploited by the rest of the world. They must see the Caribbean as a complementary force for external competition and not parts of internal competition,” Patterson reasoned.